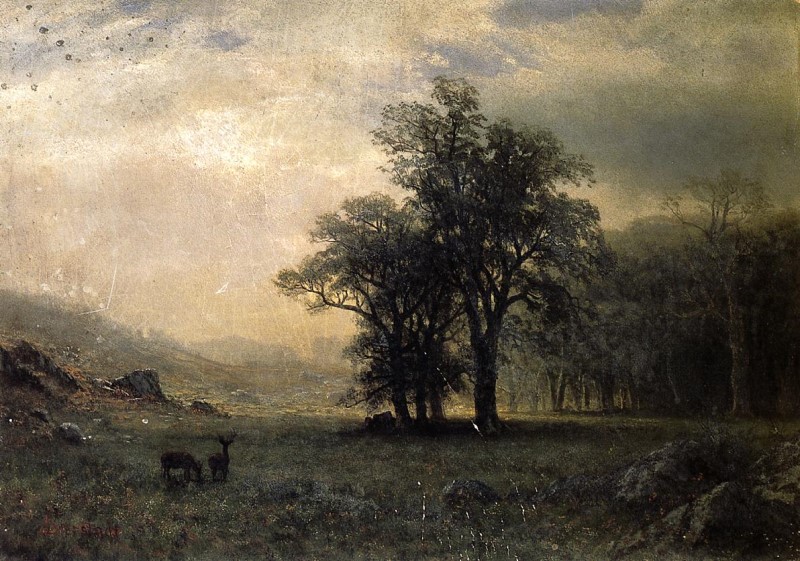 A Reassessment of Puritan Poetry
by Lynn Michael Martin

The common view of Puritanism today is itself nearly as harsh as it presumes Puritanism to have been. The word brings to mind stiff clothes, witch hunts, long sermons preached by sour-faced ministers, and all manner of like detestable practices. From this conception we receive the term puritanical—dour, pleasureless, and vindictive. Virginia Woolf, for example, describes her grandfather as a Puritan “who once smoked a cigar, liked it, and so threw away his cigar and never smoked one again” (2158). Today’s society, finding nothing praiseworthy about the term, also repudiates the movement from which it originated. For that reason, many choose to interpret poets of the Puritan tradition, Anne Bradstreet in particular, as deviations from the norm, so that the total depravity of Puritanism will not tar these poets by association. However, such a distinction between the poets and their culture is certainly suspect. It is legitimate to interpret the Puritan culture through its poets, such as Anne Bradstreet and Edward Taylor, rather than through modern hedonism, and I suggest that this interpretation shows a much more nuanced picture of the movement. Though the two poets’ styles differ largely from the “puritanical,” in many ways they exemplify and do not abandon the heart of the actual Puritan movement.

In Anne Bradstreet’s poetry, she upholds ideas in many ways compatible with Puritan culture as we usually understand it. “The Prologue” is full of such references. Bradstreet begins by deprecating her talent, saying that she is not qualified to “sing of wars, of captains, and of kings” (135). In the Puritan mind, it would hardly be proper, and likely far too ambitious, for a woman and mother of eight to write such verse, and Bradstreet concedes this, though with an emphasis more on lack of talent: her “obscure lines shall not so dim” the exploits of kings. “The Author to Her Book” also implicitly points toward this. Bradstreet says that she finds “nought save homespun cloth i’ th’ house” for her book of poetry, which she personifies as a child (142). As a mother, not only metaphorically, but also actually, any homespun cloth in the house would have been of her own spinning. This metaphor serves to remind readers that Bradstreet is a hardworking Puritan mother, suggesting that, in writing her poetry, she has no time and takes no time or resources beyond what it requires. She is dutiful, knowing what belongs in what place in her culture, and she is willing to keep them in that place.

However, Bradstreet is hardly a spineless woman, though we might expect one who grew up with Puritans, even marrying one, to be weak-minded. Ann Stanford proposes that the “atmosphere of conformity” in her work hides a “quiet rebellion” (378), though “quiet” often understates her countercultural assertions. Bradstreet does not complain about the dominance of men, but she stresses that men shouldn’t object to women writers. Much “despite,” she says, is “cast on female wits” (136), but she points out, in the words of Stanford, “that to the Greeks the Nine Muses were women and Poesy itself was ‘Calliope’s own Child’” (375). Of course, Bradstreet admits, “the Greeks did nought, but play the fools and lie,” but, in a line that may or may not be ironic, she asks for at least “some small acknowledgement” of woman’s talent (136). She does not always hedge her claims with such restraint, however. Her elegy for Queen Elizabeth couches Bradstreet’s belief in strong terms: “Let such as say our sex is void of Reason, / Know tis a Slander now, but once was Treason” (140). Clearly her humility and sense of duty did not keep her from calling her critics slanderous and even treasonous. Bradstreet believed that women should have a prominent place in their culture, and no one stopped her from saying so.

Puritanism is considered a very no-frills, religion-centered society; however, Bradstreet’s poetic subjects deviate from this conception. Stanford asserts that “[t]he apotheosis for the three characters [Bradstreet] celebrates [in her elegies] is not a higher Christian transformation, but fame” (378). Robert Richardson agrees. Bradstreet “seems interested in contemporary knowledge about man, and she appears to have been especially attracted by the old exotic empires glittering with famous men and deeds” (319). This hardly seems the religion-centered life of a Puritan, but rather a more classical, Hellenistic philosophy. According to our idea of the puritanical, a Puritan should tend to elaborate on religion or on God, yet Bradstreet’s poetry, according to Richardson, exemplifies “very little Christianity of any sort” (319).

Clearly Bradstreet differs strongly from the modern conception of a typical Puritan, but that conception, in this paper, is up for debate. Modern culture remembers the Puritan colonies mainly for their ostracism of Anne Hutchinson and Roger Williams, and in particular for their infamous witch trials. Tolerating dissent, apparently, did not number among their strong points. However, in that allegedly bigoted culture, Bradstreet could actually press for recognition of women’s rights, or at least women’s talents, without any extreme disapprobation. She could even write from a classical philosophy without being banished. Though Bradstreet mentions “carping tongue[s]” (136), these tongues apparently did her no harm. The same people who had banished Hutchinson surrounded her, but these people permitted her to write her poems. Clearly the Puritan culture did not amount to totalitarianism. For a women who worked with and not against its systems and precepts, it allowed remarkable leeway for cultural criticism and the secular.

There is no emphasis on women’s rights in Edward Taylor’s poetry; however, like Bradstreet, he hardly stands out as “puritanical.” Also like Bradstreet, his work has “Hellenistic” characteristics; for example, Taylor sets up his dialogues between justice and mercy in the style of Theocritus (Weathers 19). This and other allusions to Greek poetry are hardly surprising when in fact, Taylor’s library of poetry contained predominantly classical works, except for a volume of Bradstreet—hardly a set of books for a closed-minded Puritan (18).

Taylor did indeed write overwhelmingly religious poetry, unlike Bradstreet; however, both his and Bradstreet’s poetry use similarly intimate language—they have no puritanical fear of attachments or emotion. Evan Prosser points out that Taylor refers to God in such ways as “make my flesh thy Tent,” and “Thou art my Refuge City” (377). Similar intimacy characterizes the whole of Taylor’s work, typifying a soul’s deepest prayer to a very present and close deity (376). Bradstreet also writes in intimate language, particularly in her love poetry, such as in the poem “To My Dear and Loving Husband”: “If ever two were one, then surely we,” and “My love is such that rivers cannot quench, / Nor ought but love from thee, give recompense” (143). In “A Letter to Her Husband, Absent,” she emphasizes oneness with her husband, comparing their relationship to that of an unseverable head and heart. She even calls him her Sun, and longs for his warmth (144). Surprisingly, these two Puritan poets display nothing of prudish or stiff religion, but rather an emotional and deep intimacy.

This intimacy does not necessarily oppose Puritanism. On the contrary, Jerald Brauer asserts that Puritanism was “founded primarily and initially on a deep religious experience which [was] of dramatic intensity for every individual in the movement” (100). English society dissatisfied Puritans not because it contained too much pleasure but because it lacked the zeal which characterized their personal experiences. They indeed focused on form and propriety, but only because they were alive, not because they were dead (102). Though their zeal often led them to radical legislation, unswerving ardor to uphold that legislation, and attempts to purify society even beyond their churches, Brauer suggests that Puritanism was fairly diverse theologically and that it was in no way anti-intellectual or stereotyped (105, 107). This left a space for Taylor’s and Bradstreet’s secular inspirations, while the emotional and at times mystic zeal of Puritanism brought an urgency to Taylor’s relationship with God, and in Bradstreet’s case stretched out to include her relationship with her husband. It is illuminating to note that America’s first woman poet, and the most prominent one of the early colonies, wrote in New England, not in Philadelphia or Jamestown. A culture’s poetry displays its heart, and, if we lay aside an automatic dislike of Puritanism, it becomes easy to classify Bradstreet’s and Taylor’s poetry as exemplifications of devout members of that sect.

Bradstreet calls her poetry, published against her will and not perfectly edited, her “ill-form’d offspring,” and tells it, if asked for its father, to say it had none (142). The Puritans, according to modern belief, would have found her language telling, but for different reasons—they would have thought her poetry not only ill-formed but also heretical. As for its father, they would have disavowed any attempt to link them with the bastard verse; they would have rejected it as coming not from Puritanism but from the unseemly hand of a woman. That is, they would have, had Puritanism actually been puritanical. Often our store of epithets says more about us than about the imprecations themselves, and the denigration of “Puritan” to “puritanical” tells us less about actual Puritanism than about our society’s distaste for sobriety, chastity, and guilt. Whatever the Puritan’s faults may have been, their movement allowed plentiful space for emotional release and for diversity of intellectual thought. Bradstreet’s poetry may not be classical or eternal, and thus perhaps not perfectly formed, but we may at least call it the offspring of Puritanism, both legitimate and welcome.

Author’s note: This was originally written for an American Literature class, and is posed as a critique of some of the assumptions I encountered in class discussions.