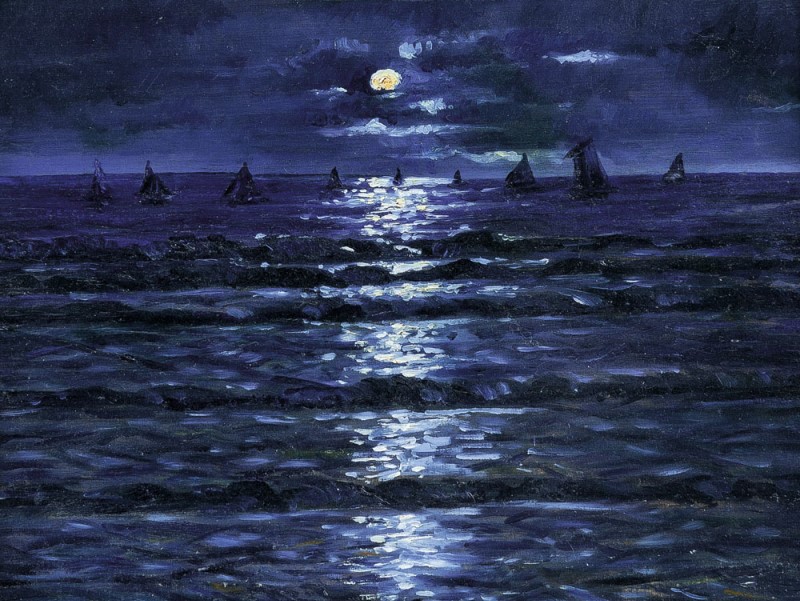 The study of art today connects our era to almost every other civilization which has left any kind of record. Thus, by study of the arts, and specifically literature, the art world strives to create a binding force which celebrates inclusivity and diversity. Amid this diaspora of voices, one would assume that loneliness either of person or of culture would no longer exist. Yet “The Weary Blues,” a short poem by Langston Hughes, challenges this assumption. It depicts a black pianist who plays a lonely tune late into the night. The poem’s rhythm and the soft melancholy of its word choices express a heavy loneliness, both that of 20th-century black blues culture and also that of one artist seeking comfort in the uniquely personal nature of the creative act.

Droning a drowsy syncopated tune,
Rocking back and forth to a mellow croon,
I heard a Negro play.
Down on Lenox Avenue the other night
By the pale dull pallor of an old gas light
He did a lazy sway. . . .
He did a lazy sway. . . .
To the tune o’ those Weary Blues.
With his ebony hands on each ivory key
He made that poor piano moan with melody.
O Blues!
Swaying to and fro on his rickety stool
He played that sad raggy tune like a musical fool.
Sweet Blues!
Coming from a black man’s soul.
O Blues!
In a deep song voice with a melancholy tone
I heard that Negro sing, that old piano moan—
“Ain’t got nobody in all this world,
Ain’t got nobody but ma self.
I’s gwine to quit ma frownin’
And put ma troubles on the shelf.”

The rhythms in “The Weary Blues” contribute hugely to the musical effect of the poem. For example, though technically a variation of iambic hexameter, the following lines can be functionally scanned as the following:

The three accented syllables (let us call them a molossus) in the first line of this selection force the reader to speak more slowly. The molossus gathers the weight of the line to its beginning, and the resulting imbalance opens into a singsong rhythm formed by the remaining feet—unusually long feet, with their plethora of unaccented syllables. Then, when the singer begins his melancholy poem, the accent goes back to slowly spoken molossi,

But this imbalance, instead of creating a singsong rhythm, produces a slow swinging effect, a “lazy sway,” as Hughes calls it a few lines before. The rhythm thus creates the same effect which the poem describes: a slowly rocking tune.

The rhymes and the sound-sets of words and phrases, however, impress on “The Weary Blues” a second level of musicality. Rhymes such as “tune” and “croon,” “play” and “sway,” “tone” and “moan,” tie together the sound-filled imagery. Even more importantly, they serve to emphasize the rhymed words—all of them good, deep-rooted Anglo-Saxon words. The rhymes’ first effect is to highlight the rhymed vowels, vowels which through their sonorous sound-sets produce something almost like onomatopoeia. Nor, of course, does this stop with rhymed words—the physical musicality of word sounds spills into the bodies of the lines. This is particularly seen in the molossus “deep song voice” which uses musical vowels: a long vowel, a diphthong, and one of the most common singing vowels.

The second effect of the rhymes and similar devices is to raise up, on the foundation of the base-level phonetics, a poignant turn of phrase characterized by heavy use of connotation. “Tune” and “croon,” “tone” and “moan,” besides sporting singable vowels, together connote a melancholy with the sweetness of a love-song (“croon”) and the grief of a poem of loss (“moan”). Other devices also bring out these connotations. For example, in the first line, “Droning a drowsy syncopated tune,” the alliterated words both have lethargic connotations and drape the line with a drowsy tone. And again, in the fifth line is “the pale dull pallor of an old gas light,” where the two p– words bring their loneliness into the light of the singer’s surroundings. But the consonances take it even farther: in “the pale dull pallor of an old gas light,” the physical sounds l associates the words with the heaviest connotations. Finally it ties them to the word they modify, and which is to receive their weight: “light.” Suddenly this light is no longer merely described as dim, but dimmed by the words which surround it like a lampshade. The result of these particular poetic devices is of course not onomatopoeia; however, their result adds a phonetic emphasis to the words which most contain the poem’s soul. This focused technique brings out the “melancholy tone” and makes it a part of the poem itself, wringing the words into a cry of loneliness. Its poignancy touches both the poem’s ostensible content and its cultural background, creating a threefold thread.

The third thread, not yet described, is that the pianist’s loneliness has become that of his slowly-freed people. Those of his ethnicity are cut off from the surrounding culture, not only in their lack of rights, but also in their ostracism from the traditional American art movement. Thus, like the Harlem Renaissance artists and musicians (of which he is perhaps one), he sits alone in a pale room, forgotten by the rest of the world, playing for “nobody but [him] self.” The poignancy of his song flows out of his search for the soul freedom for which every human longs, and instead of playing music in the classical tradition in which he has not been made welcome, he makes what he knows of music, and to him it stands for that longing. Thus the world of African Americans in the Civil Rights era comes to a point in his experience.

But he is not only cut off in that he is a member of a minority group—his culture may stand alone, but he himself has nobody. Art is made to be seen, and music is made to be heard, but the weary musician has no audience but himself. And just as his music reaches only his ears, “The Weary Blues,” is itself built and rhymed so carefully: tied up in itself, self-referential and bound up with alliteration and rhythm. It expresses loneliness, but does not reach out to people to hear—it seems there is no one to hear. Thus the pianist plays while the night grows old as a human being forgotten on a crossroads:

“And far into the night he crooned that tune.
The stars went out and so did the moon.”

Everything has left him but his music; even the eternal moon and stars are gone. The loneliness which comes to its emotional height in the first stanza comes to its final and bitter fullness with this loss of all that poets and musicians cling to. It is this that makes a man an Oedipus, turning, enlightened, from the social centers of humanity to follow his fated road, or a Diogenes who, seeing the futility of mankind, sits in a wine barrel. Yet the black pianist finally ends his singing and goes to bed; smiling, as it were, in the face of this nothingness, like the older waiter in Hemingway’s “A Clean, Well-Lighted Place.” Perhaps he knows that, whatever he may feel, he must wake up the next morning and  continue to live his life. Raging against fate is all very well, but we are still human beings and need to eat, breathe, and work.

But while the pianist is able to cope, he has not received an answer. His loneliness remains, and his song, played to distraction, becomes internalized—

“While the Weary Blues echoed through his head.
He slept like a rock or a man that’s dead.”

Though he is unconscious, sleeping “like a rock,” the song still remains with him, singing in some ear which his conscious mind does not hear. Only a song like this can continue to sing in his head—a song of catchy rhythms, beautiful cadences, and unutterable melancholy. This music has changed him, not only in the moment of its making, but, like his daily food, in becoming a forgotten part of his very life. But this part of his life does not take away his loneliness; it rather exacerbates it. He has turned to his art for solace; he has even said that he’d “put [his] troubles on the shelf,” but the Weary Blues continues to echo around him, rhyme after rhyme, rhythm after swaying rhythm. He has reached out with his art, spinning a song of his loneliness, but he hears only his song, echoing in the pale room of his head.

And, in English studies, the singer’s soul continues to sing and to pound out his Weary Blues, now as an example of poetry from an ostracized minority culture—and though it now stands amid thousands of poems gathered from dozens of cultures it has become no less lonely. As long as “The Weary Blues” has a head through which to echo, it will spin its melancholy. The pianist has gone to bed, the poem is now a hundred years old, and still the weary blues sing in its meter—none of its poignancy is gone. It itself stands alone, a discrete unit of rhyme and rhythm, buttressed inside like a toucan’s beak, and though it stands in a context, that context itself is one of a minority culture, separated from all others. The poem, the poet, the singer, the song—nobody else in all this world.

2 thoughts on “Becoming a Musical Fool”