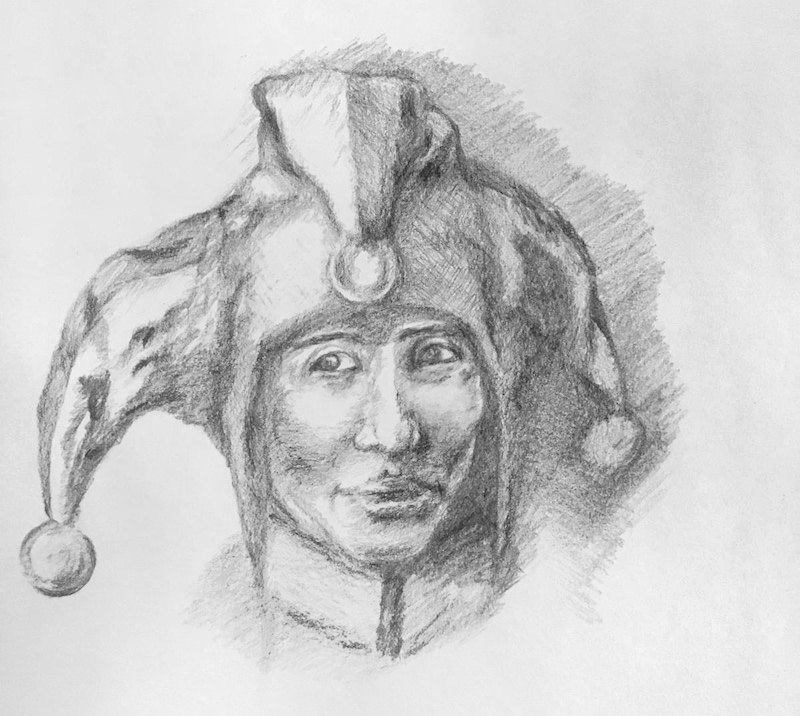 Then Must the Fool be Wise

What do I know of Fools?
To wit? A foolish one.
Too foolish? But a wit.

“What’s in a name? A rose by any other name would smell as sweet.” wrote Shakespeare, the great playwright who gave us many of our oldest idioms. He is also that author without which no serious reading library is complete. Shakespeare was a master of language and character, as we know, but he also wrote for the common people, which might seem odd since he seems to belong to the literary elites and the nerds and the foolish. But about fools. To be named a fool is not considered desirable. Try calling someone a fool and you will be reprimanded—and justly so. Fool is a slanderous term by common agreement, yet the difficulty is one of perspective. Is the fool who we think he is?

Shakespeare used the fool character in many of his plays not only to do the dirty work and add humor but also to tell the truth. Foolishness may not seem to be the quickest way to the truth, and it may not be, but perhaps it is the only way to recognize carefully groomed follies, justified sins, and inane shortcomings, the kind of truth that is least palatable to us. Court fools were tasked with mocking the king to just the extent that the king could stand it. Hence, court fools were often well-educated, knowledgeable people with a talent for spicy speeches and just such fools have won the audiences of Shakespeare.

Whether or not Shakespeare’s fools are like those men who actually did the work of a court fool in history is not our primary concern. The material at hand is not a historical analysis, but an exploration of the fool in the medium of literature. Shakespeare wrote many characters to play the part of the fool, sometimes as the actual court fool and sometimes fools by birthright. In plays such as Henry IV, Measure for Measure and King Lear, the fool is recognizably different. Because the fool archetype represents innovation and unconventionality it can be acted out in many styles; one of the reasons that this archetype is so difficult to describe comprehensively.

In A Midsummer Night’s Dream, Nick Bottom is the unaware fool. The donkey’s head that appears on his shoulders completes his portrayal as, well, an ass. The Merry Wives of Windsor and King Henry IV also have fools of this style: physical shortcomings, oddities, pomposity or idiocy, contrasting with Touchstone in As You Like It and Feste in Twelfth Night, who combine elements of comedy with cynical commentary and more conscious wisdoms (Rasmussen; DeJong 2016). As You Like It was my first true Shakespeare interest on account of Touchstone’s pithy humor in truth telling.

Touchstone: “The truest poetry is the most feigning, and lovers are given to poetry; and what they swear in poetry may be said as lovers they do feign.”
Audrey: “Do you wish, then, that the gods had made me poetical?”
Touchstone: “I do, truly, for thou swear’st to me thou art honest; now, if thou wert a poet, I might have some hope thou didst feign” (As You Like It).

It is in King Lear though, a later work, that we discover a mostly melancholy fool in place of an entirely humorous one. What shift in the structure of the world portends such morphing of a character traditionally of humor into one of sorrow? The specific manifestations of an archetype in story or life are interconnected; therefore, it makes sense that when one character moves out of their usual role this throws the rest into confusion. For example, the king and the fool juxtapose each other, for the fool is the advisor, entertainer, and regular companion of the king. They depend on one another. The pinnacle of the social hierarchy is the king who symbolizes (ideally) all that can be praised and trusted in mankind. What humanity reveres as the height of society represents what is considered valuable. The fool dances on the edge of the explored world; he is possibly dangerous, possibly anything, representing the chaos of the unknown. When the world runs well the fool is a merry conniver and a pesky trickster and an outrageous speech-maker. But when the structures and the king they enthrone fall away the fool also falls away. And where is the fool then?

In brief, Shakespeare’s King Lear depicts the story of an old man, a king coming to the end of his life who demands protestations of love from his three daughters that will determine what sort of inheritance they receive. The elder two fawn upon their father, but Cordelia, the youngest daughter who truly loves him, refuses to speak, indignant at such a test of words and is disinherited by an outraged Lear. King Lear deteriorates into less and less of an authority flanked by his two conniving and false daughters while he continues to alienate his true allies. His fool, unnamed by his master except by “boy”, is one of the few people allowed to remain for a time. The fool grieves over the decline of his master. Early on, he recites a poem to show Lear his foolishness.

Lear [enraged]: “Dost thou call me fool, boy?”
Fool: “All thy other titles thou hast given away” (King Lear).

Fool: “I am better than thou art now; I am a fool, thou art nothing.”

The king, who by rule and role is to be the highest conception of what man can be, becomes less than a fool. Verily then must the fool be wise.

Fool: “If thou wert my fool, nuncle, I’ld have thee beaten for being old before thy time.”
Lear: “How’s that?”
Fool: “Thou shouldst not have been old till thou hadst been wise.”

King Lear realizes his folly near the end, just before he dies. Had he listened to his fool his demise may not have been so complete. But King Lear is written to be a tragedy. It plays out in the extreme what we experience in a lesser degree. Storytelling is beneficial because it allows us to explore possibilities without suffering the literal consequences. Revering the fool in place of the king is a definite indication that we should look to our mooring lines for we are more at sea than we intended. The leader should not be the fool. In an inverted system like this the fool indicates what is, not what we aim at becoming. Jonathan Pageau, in his lecture on the fool archetype, urges us to watch the “fools of society” when the world turns topsy-turvy because they show us something about why the established systems are not working (Pageau). Even so did the fool mock Lear’s arrogance and lack of wisdom.

How one does or should act the part of the fool is …tricky. The fool is dangerous and yet, artists must, in a sense, become fools to create. Creativity seeks into the unknown. The very notion of innovation and creativity is a bringing together of information and ideas in a way that is new, and what is new often criticizes what exists. In King Lear the fool critiques the system, in this case literally the king. Art and its makers assume that role, intentionally or otherwise. Art is creative and naturally trends toward what is not consciously known; therefore, the art and its maker may be thought unconventional and unnecessarily different. Thus, the fool tends to be misunderstood as King Lear’s fool protests:

“They’ll have me whipped for speaking true, thou’lt have me whipped for lying, and sometimes I am whipped for holding my peace. I had rather be any kind of thing than a fool; and yet I would not be thee, nuncle; thou hast pared thy wit o’ both sides and left nothing i’ the middle” (King Lear).

Not only is the fool often misunderstood, but also quite likely wrong. Not just any critique is a useful critique. The “fool” gropes into the unknown, but malevolent inspiration can take him captive. The appealing idea of reconstructing myself into the one crying valiantly against the system, sadly misunderstood by people of a brutish common sort, must be subordinated to this cry: “I would rather be any kind of thing than a fool!” It is for the sake of transformation that foolishness becomes a necessity.

Shakespeare, William. As You Like It http://shakespeare.mit.edu/asyoulikeit/full.html Accessed 27 January 2021.