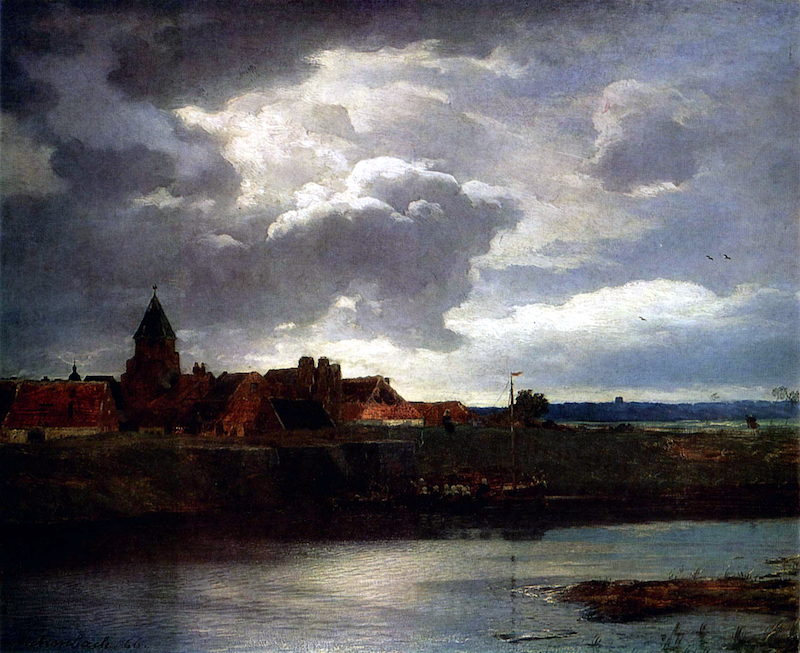 The Anabaptist Garden: Jacques as a Core Sample of Candide

One surprising part of Voltaire’s Candide is its treatment of Jacques the Anabaptist. Jacques appears and takes a part of the stage just beyond the limelight, saying nothing except for a few intriguing statements, before dying in an attempt to save a drowning man. Despite this lack of presence on the part of Jacques, however, Roy Wolper suggests that the Anabaptist merchant is the center of Candide, embodying its values (“Gull” 277). His place in the text is certainly a telling one. He bears a strong resemblance to many of the other positive figures in the story, and the philosophy which he puts forward gives great insight to the meaning of Candide and of the garden which the adventurers cultivate. This meaning, to Jacques, is a sort of incidental humanitarianism, an everyday philosophy which asks for nothing but which offers assistance to any who may require it.

We know little of Jacques, mainly because he is virtually the only character in Candide who, when he dies, does not return to life. While it lasts, however, his life is one of great interest. He first appears as a religious outsider who takes pity on Candide when villagers attack the boy for not being a vitriolic Protestant (104). Jacques, we are told, manufactures Persian rugs in Holland, and gives Candide both money and a job. Jacques further shows his giving nature by paying to cure Pangloss, and finally gives up his life to save a sailor who has ill-treated him. Jacques does all this with an unpretentious pragmatism; like no other character in Candide he helps other people without the least existential worry. He does indeed know what is going on in the world: to Pangloss’s imbecilic claim that all is well, Jacques says that “men have corrupted Nature, for they are not born wolves,” but become so. He points out that mankind has invented weaponry for our own destruction, and he mentions, as is clearly of more interest to him, that bankruptcy is unfair because the creditors do not gain by it (106). He is apparently not greedy or self-obsessed.

Thus Jacques is easily read as an admirable character and one which typifies the story as a whole—he does good and helps those that he can, just as, according to Wolper, Candide itself “insist[s] on the need of beneficence” to fellow humans (“Gull” 277). More so than any of Candide’s other benefactors, such as Cacambo and the old woman, Jacques acts with unpretentious service, requiring nothing and never putting himself in the center. This positive philosophy, it seems, is one which Voltaire admires, though he always holds a quasi-disdainful attitude toward Jacques as toward all others in the story. This sense of mockery does lead Arthur Scherr to question Jacques’s commendability and to claim that Jacques is not a good but rather a selfish figure. For example, the Anabaptist seems to be selling fraudulent wares—operating a Persian-rug factory in Holland—and when Jacques helps Pangloss and Candide, he may be merely picking up two workers for his “sweatshop.” Scherr suggests that the doctor Jacques hires for Pangloss is a quack, since the philosopher is left missing an eye and an ear (74). He even goes so far as to suggest that Jacques’s only motivation to save the drowning sailor is to keep the ship afloat: “[W]e perceive,” he says, “that Anabaptist Jacques acted on rational calculation at least as much as from a humane desire to save life when he rescued the sailor. Not expecting to be drowned himself, Jacques was aware that as many hands as possible would be needed to prevent the tempest-tossed ship from going down” (75).

There is no reason to suppose such an unsupported conclusion, however. The Persian-rug factory seems not fraudulent—Jacques makes no attempt to hide it—but rather a cynical observation on the side of Voltaire as to the inauthenticity of everything. Pangloss’s loss of an eye and an ear seems also a slur against life rather than against Jacques, and if the doctor is in fact a quack, that does not make Jacques a Machiavellian businessman—there is no direct line between the two. Jacques is not running a sweatshop, or he would hardly be allowing his newly acquired workers to be philosophizing about life on company time—besides, Pangloss is hired to do bookkeeping, hardly a menial task, and one which is not lightly given away by a grasping businessman. As for his saving the sailor, Scherr puts forward no evidence to demonstrate that Jacques acted in “rational calculation” rather than out of humanity, and indeed, there is none. However, the one valid point which Scherr makes is of the tone Voltaire uses here is one of satiric mockery. However, this is not confined to Jacques, but to the whole story, where horrible scenes are continually mentioned in passing. That he mocks Jacques, just as he mocks the “Persian” rug factory, does not mean especial criticism of him, but rather of the world. The evil is the world’s evil, and Jacques himself is not part of it.

In the face of that evil, Jacques continues to live and to die, exemplifying a philosophy which Voltaire respects, and which verifies the ultimate philosophy of Candide. Jacques is an honest man going through the world, not expecting it to be more than it is. The sense we receive from him is one of hardworkingness and not of an overabundance of philosophy. Every time he appears, it is as an unassuming man who either says nothing or says nothing beyond what is necessary; people’s worlds fall apart around him, and he gives them humanitarian aid—when his own world falls apart, he dies cursing no one. It is this which makes Wolper see in him the ultimate philosophy of Candide—which “is concerned neither with sudden earthquakes nor with the fate of Jacques, but with the spirit Jacques has: . . . to care about those who are poor; to educate those . . . who hold to inane (and hence cruel) archaisms” (“Gull” 277). Jacques certainly shows a continual burden for humanity, and though he is not lauded for it, he certainly behaves as no one should be ashamed to act.

Lester Crocker takes exception to this view, saying that “if anything is ‘superfluous to the conte’s world,’ it is Jacques and his philosophy,” pointing out that by Jacques’s death he is “quickly expunged by wickedness” (150). But that is a rather hasty description of a more than simple scene. If Jacques’s philosophy is ineffectual in the circumstance of Candide, it does not mean that Voltaire is criticizing him: after all, though Eldorado is a successful society, no one suggests that Voltaire proposes it as viable. “We admire Jacques,” Wolper replies, “not because of the success or failure of his efforts, but because of their direction: his is the only human path” (“Reply” 155). Indeed, he notes, the final injunction of Candide to “tend our garden” is also not one of complete effectiveness and safety—“Candide should know, and the reader certainly is aware, that evil has no borders, and that even the most innocent are often trammeled within its mesh” (“Gull” 269). There is no guarantee of continued existence for anyone, not even the one who takes the path of purposeful labor. If Crocker’s view is accurate, everything is “superfluous”—“quickly expunged by wickedness.”

But Candide does not end toward meaninglessness, which would necessarily follow if such were the case. If effectiveness were the only consideration in Candide, the continual ineffectiveness of everything would argue for nihilism, yet, though Voltaire prescribes no magic pill for humanity, the story ends with an upturn, an ending not of fairy-tale quality, but certainly with some positivity: everyone and his mistress has become ugly and disillusioned, but the group does live in peace. Certainly this “happy ending” does not need to mean that Voltaire intended happiness—little else in the story is anything other than satiric mockery—however, a change has taken place where no change has taken place before: in Candide himself. He has become something other than the boy who deified Pangloss, and ends the story by silencing his former master: “That is very well put, . . . but we must cultivate our garden” (159). Such a hopeful change indicates a positivity and not a meaninglessness of Candide; and if so, Jacques the Anabaptist may also have words to tell us, particularly as his example has similar characteristics to the other “garden” parts of the narrative.

What Jacques has to tell us is not a simple thing. First, he does not wish to tell us anything in particular, only to help those that he can—he talks no more than necessary, and when he argues with Pangloss, it is not primarily to convince the philosopher of some existentialist philosophy: Jacques ends up rambling about creditors and debtors. He does embody, however, a somewhat attractive set of values: according to Wolper, Jacques “combines both intelligence and caring, which run throughout the conte, though the conte would have these values without him” (“Reply” 154). If there is a meaning to Candide, Jacques is indicative of it. Wolper characterizes the story as an injunction against “Dulness” and “cruelty,” and places Jacques in the center of it (“Reply” 155). Certainly the same quality which is in Eldorado and the Turk’s garden is in Jacques, the respective positive qualities of hardworkingness and kindness. The Eldoradans exemplify beneficent society, and the Turk exudes hard work—both of these integral characteristics of Jacques, characteristics which make him, by comparison to his fellows in Candide, an ideal person.

Jacques is not a perfect figure, but he has something resilient and human which makes him embody a strong positive message. He is hobbit-like: somewhat dull, but he can be trusted to act as a human being. He gives his life for the furtherance of the human race and does not ask for any more than he is given. In this he exemplifies something inherent to Candide, something which is arguably its main philosophy, but which certainly is telling to the message of the work as a whole. Pangloss may talk, Cunegonde may grow ugly, and Jacques may die, but there is still some small hope for us humans if we follow Jacques’s leading and maintain goodwill toward the rest of mankind.

Lynn Michael Martin is slowly learning that he is not the center of the world.

One thought on “Lynn Michael Martin: The Anabaptist Garden”